I was speaking with an older student, trying to figure out how I was going to fit the self directed philosophy with high school age students.

We talked about how she was miserable in her middle school and really enjoys learning at Heartwood. She talked about how her other friends at her other school were not really friends, she doesn’t talk to them much anymore, but she has great new friends, of all ages. She pointed to a little one and said, “a five year old is my friend.” Above all, she’s happy.

This sense of community extends into social activism, one of the premises of Heartwood.

One of the ways students learn social activism is through Lit Club. The selection they were discussing the day I visited was an excerpt from Dear Martin, by Nic Stone.

Four students came to Lit Club, two boys and two girls. I only got pictures of the girls though because the discussion got very interesting and I forgot to take pictures during the actual Lit Club. 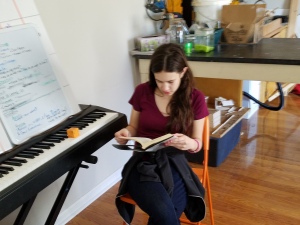 From what I understand about Lit Club, an offering by co-director Julia, books are chosen from different resources for their profoundness. The students then decide the order in which they read the books. Students can have a say in the selections as well, but they seem to really enjoy Julia’s selections.

The excitement and wonder was palpable, over an excerpt of a book!  They answered Julia’s questions and added to her comments as well as made their own comments and questions about the book.

Again, time became irrelevant as I listened to the discussion about their feelings over what happened to characters in this section and comparisons to other books they’ve read in Lit Club.

Several times standard literature vocabulary like plot and point of view were used.  This was a true literature circle with students comparing and contrasting to events in other works as well. They were able to ask and answer higher order thinking questions.

I was in awe and thrilled.

How many times had I hoped my students would read and get into a book, ANY book, but they’re usually stuck to a device, staring at the screen, or have that glazed over look that says, “I wish this was over.” Seeing and hearing students really discussing a book using the vocabulary on their own was amazing.

I realized self-directed curriculum really does cover everything that needs to be covered in the standard curriculum. Children are so ready to learn, we just have to give them the space and there’s no limit to what they can do.